Werewolf gets top position in poster for upcoming “Goosebumps” movie

Werewolf News reader Drockan Firestorm just emailed me with an update (including a rad poster) for the upcoming Goosebumps movie, starring Jack Black and based on R.L. Stine’s kid-friendly/kid-traumatizing horror books from the 1990’s. END_OF_DOCUMENT_TOKEN_TO_BE_REPLACED

Class up your parlour with “Werewolves Playing Poker”

Out today: “Beat The Champ“, the new wrasslin’-themed record from The Mountain Goats. You should go buy it on Amazon or iTunes (or at least give it a listen) and then check out this deadly gorgeous tour poster drawn by John Keogh and inspired by the song “Werewolf Gimmick”. END_OF_DOCUMENT_TOKEN_TO_BE_REPLACED

Another gorgeous Mondo poster for “The Wolf Man”

Here’s another wonderful piece of fine art werewolfery from Mondo, those magicians of film and pop culture artifacts. Mondo commissions incredible artists to produce poster artwork for cult / classic films and TV shows, and then burns through a run of limited edition prints in a flash sale designed to make collectors with slow internet connections cry bitter tears. END_OF_DOCUMENT_TOKEN_TO_BE_REPLACED

Via Daily Dead and the Mondo Blog, here’s a look at the limited edition Mondo poster for The Wolf Man, designed by Laurent Durieux. This 24″ x 36″ poster is part of Mondo’s UNIVERSAL MONSTERS show, and is limited to 380 prints. END_OF_DOCUMENT_TOKEN_TO_BE_REPLACED

According to its Facebook page and a post on Fangoria, British horror-comedy Strippers Vs. Werewolves has wrapped and will be released sometime before Spring 2012. The last time I posted about this film I was pretty mean, but I think I had just cause: there were no details on casting or story, and the poster/concept art was… not encouraging. But all of that has changed, and (as I’ve so often done lately) I am retracting some of my shitty comments.

A new poster has been released, which Fangoria describes as “Ali Bastian as stripper Danni, aiming a shotgun at Martin Kemp as werewolf Mickey”. It looks fun, and it’s certainly more evocative and stylistically interesting than previous posters.

And what’s the film about, other than the obvious?

Okay, yeah, I’d watch that. Would you?

Jordan Cushing just emailed me this info, which is info that you should know if you are interested in “13 Hrs“, which is a movie you should care about if you care about werewolves! Jordan says:

The UK distributor High Fliers Films PLC have now made their involvement public. The film will get its premiere as part of the UKs Fright Fest on August 28th in a nice big 1300 seat cinema.  Some of the cast is definitely attending with more yet to confirm. That will be followed by a limited release in UK cinemas in October. A new poster is on display at the Fright Fest site and a version of the same artwork can be seen at the High Fliers site in the scrolling bannerhead.

This is exciting, and it’s yet another thing that makes me wish I lived in the UK. How does Jordan know these things? Well, if you’ll recall, he’s the director of photography for 13 Hrs, which means he knows a lot of things about the movie that you don’t… like who the werewolves are (yes PLURAL, I’m making an educated guess), what they look like, and what beverages actor Tom Felton goes for at the craft services table (I’ll bet he’s an orange juice man). Thanks for the info, Jordan!

Tiny “Gladiators V Werewolves” JPEG Gets My Hopes Up

The tiny JPEG to the right is purportedly the first official poster for Gladiators V Werewolves. Sadly, this is the largest version of the image I could find (hat-tip: Quiet Earth). And… that’s it! No one seems to know much about this film. Check out the three previous Werewolf News posts about it and you’re pretty much up-to-date.

Thanks to @SheenFanSite for the heads-up.

It’s no secret that I’m a big fan of John Allison’s work. His long-running comic Scary Go Round sustained me for years, and his new (and even better) comic Bad Machinery was what finally convinced me to start using Google Reader– I require an immediate alert when the newest one is posted. John also managed to eat a chocolate bar and shake my hand at the exact same time, which just goes to show the industrious spirit that helped the British to colonize so much of the world.

If you like werewolves and you like comics, John’s just started taking pre-orders for a limited-edition print that you can probably add to your list of likable things. At £10 + £2.50 international shipping, there’s no reasonable excuse to refrain from buying one, especially considering that each purchase helps support a fellow who’s been giving away amazingly entertaining material for years. Here are the details:

McGinty (werewolf) and Hughes (small monkey) present “Red Riding Hood”. Signed and numbered run of 100. You can see a larger version of the poster here. 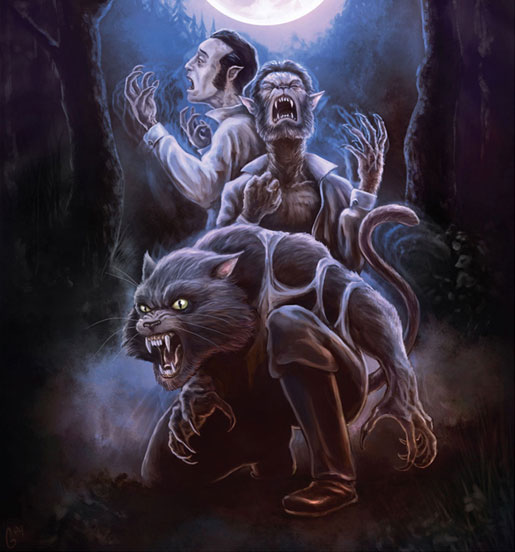 Glen Ostrander submitted this image back in April, and with the recent discussion of whether Michael Jackson was a werewolf or a werecat in the Thriller video, the time seemed right to post it. “I recently created a pastiche type horror movie poster”, Glen writes, “for a weekly challenge at a website I contribute to called Conceptart.org. The challenge was to design a character based off of Puss in Boots.” From the moonlit sky to the dramatic transformation poses, there’s a lot of werewolf in this were-cat picture! I particularly like the typography on the full-sized version– I can easily see this as a poster for a 1980’s horror film. You can see more of Glen’s wonderfully visceral artwork (including some awesome zombies) on his blog, and in this Conceptart.org forum thread. Thanks for sharing this, Glen, and sorry for taking so long to post it!